Free Screening of ‘Independent Lens—Tell Them We Are Rising ’ 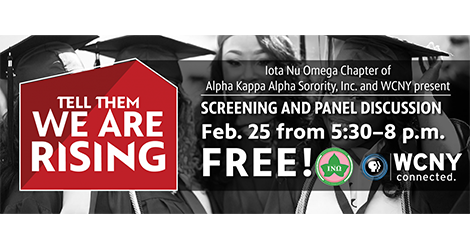 In celebration of Black History Month, the Iota Nu Omega Chapter of Alpha Kappa Alpha Sorority, Inc. has partnered with WCNY to host a free screening of Independent Lens—Tell Them We’re Rising: The Story of Black Colleges and Universities.

Following the film, there will be a panelist discussion on the historical significance of this film. The panelists will include: Lisa Alford, the Commissioner at Onondaga County Department of Adult and Long-Term Care Services; Julius Allen, a Bioengineering graduate student at Syracuse University; and Lillie Fields, a retired educator from Clark Atlanta University.

This event is free to the public and will take place in the television studios at the Robert J. Daino Broadcast and Education Center, Feb. 25, 2020 from 5:30—8 p.m. Tickets must be reserved at wcny.org/events in order to attend!

In 1976, President Ford officially recognized February as “Black History Month,” in order to highlight the accomplishments of Black Americans and their impact on the history and culture of the United States.

Check out the preview for this film here!